Rudy Van Geele (Gent/Belgium, 1955) works as an independent designer since 1987. He creates his personal collections and finishes them single-handed. He also creates lightobjects, as well as metal furniture as unique objects or in limited series. He delivers made-to-measure orders for private persons, governments or concerns.

“I want to create objects which carry and express all of my questions and hesitations. The curved designs are, the way they are, a metaphor for my searching. I create objects to which I have personal feelings of tact and beauty and which fulfil my thinking.”

Since 1987 Rudy participated in different exhibitions in and outside Belgium.

Since 1994 he co-operates with gallery “Theaxus” in Kluisbergen where he presented his work on different occasions.

He took part in the fairs “Casa Europea” in Antwerp, “Classic” in Kortrijk, “Lineart” and “Sfeer” in Gent.

He also presented his work in the “Hortamuseum” in Brussels, the “Douviehuis” in Watou, the “Landcommanderij” in Alden-Biesen and on different occasions in the “Designmuseum” in Gent. 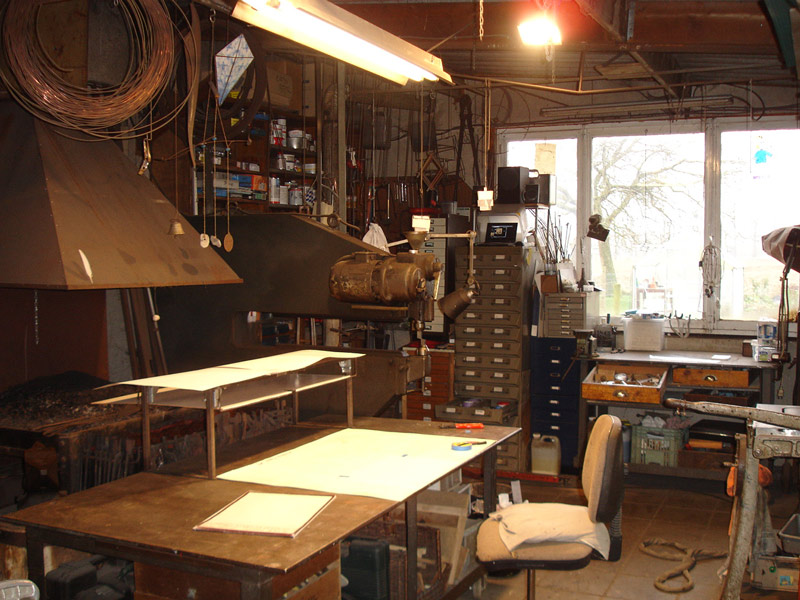 In Germany his work was presented in `Das Belgische Haus` in Cologne and in the `ICC` in Berlin, in England in the `Romney March Crafts Gallery` in Kent, in Spain in the `Palau Marc` in Barcelona and in the Netherlands in `De Brakke Grond` in Amsterdam.

From June 2002 until mai 2017 Rudy Van Geele had his own window gallery in the St-Jacobsnieuwstraat 28, Gent, Belgium. The window gallery was not the usual type of gallery, because one cannot enter it. It were two windows giving a view into a room, showing changing exhibitions with objects created and finished by him.

This website uses cookies to improve your experience while you navigate through the website. Out of these, the cookies that are categorized as necessary are stored on your browser as they are essential for the working of basic functionalities of the website. We also use third-party cookies that help us analyze and understand how you use this website. These cookies will be stored in your browser only with your consent. You also have the option to opt-out of these cookies. But opting out of some of these cookies may affect your browsing experience.
Necessary Altijd ingeschakeld
Necessary cookies are absolutely essential for the website to function properly. This category only includes cookies that ensures basic functionalities and security features of the website. These cookies do not store any personal information.
Non-necessary
Any cookies that may not be particularly necessary for the website to function and is used specifically to collect user personal data via analytics, ads, other embedded contents are termed as non-necessary cookies. It is mandatory to procure user consent prior to running these cookies on your website.
OPSLAAN & ACCEPTEREN